This paper was written for a course in my PhD schedule – History, Memory and Conflict. I find it increasingly important to remind people of our history, considering the current climate and those surrounding Trump using these camps as a precedence for registering those of other faiths. Reflections on Topaz Japanese Internment Camp Ask a person you pass on the street […]

This paper was written for a course in my PhD schedule – History, Memory and Conflict. I find it increasingly important to remind people of our history, considering the current climate and those surrounding Trump using these camps as a precedence for registering those of other faiths. 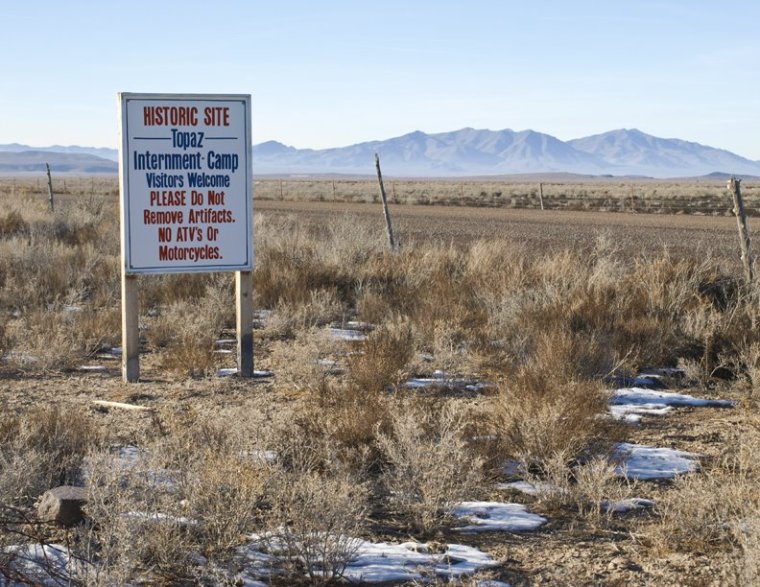 Ask a person you pass on the street what Topaz is and you will likely get a response that it is a gemstone, usually brown or orange in color, the birthstone for the month of November and Utah’s state gem.  Topaz is also a sad story, generally unknown by the American public, contained within the domestic tales of World War II.   Most people visiting the area are doing so because of the ability to rock hound for the precious gem in the surrounding fields of sagebrush and mud not because they have knowledge of what took place near Delta, Utah during World War II.  Topaz, in addition to being the state gem, was also where the state of Utah interred thousands of Japanese-Americans after the attack on Pearl Harbor.  This paper will detail the background and development of the reasoning politicians gave for the need to inter 8,000 Japanese-Americans during the war focusing on the creation of Executive Order 9066 by President Franklin D. Roosevelt and the processes created to ensure that these citizens were transferred to various locations of internment across the United States.  Why would a nation so intent on the freedoms of its people suddenly decide that a group of citizens were dangerous and must be set aside in desolate locations? How did we allow this to happen while at the same time we were fighting in Europe to stop actions such as this?   I will then shift focus to the Topaz site detailing the location and the life-style that was adopted by those moved to the location.    Finally, I will reflect on what it is like to visit the site detailing the emotional responses I have experienced seeing the barracks, other buildings and various memorial signage throughout the campsite, focusing specifically on how the site shapes, evokes and promotes a historic narrative that seeks to education the public on the relatively unknown events of Japanese internment during World War II.

On December 7, 1941 the Japanese launched a surprise military attack on the U.S. military base in Pearl Harbor, Hawaii.  Thousands of Americans were killed and wounded and the military fleet was devastated while the American public were horrified and shocked that such a violent attack could occur on their own soil.  Violence breeds fear and anger and several months later on February 19, 1942 President Roosevelt responded to the fear by issuing Executive Order 9066 which authorized the creation of “military areas” designed to protect against “espionage and against sabotage to national-defense material, premises and utilities” (Roosevelt, 1942).   The document also instructs the Secretary of War and other federal agencies to ensure that medical aid, food, clothing and other basic needs be met while the chosen citizens are removed to various areas to ensure the safety of the United States (Roosevelt, 1942).    This declaration resulted in the removal and relocation of approximately 120,000 Japanese-American citizens mostly from California and other Western states where they would remain under military guard until the war was over (PBS, 2007).

The U.S. Government, supported by the military and the fear of the general public allowed for the perpetuation of fear and anxiety by moving forward with the act of internment.  There was an intense belief that citizens of Japanese decent posed a direct threat to the national security of the United States after the attack on Pearl Harbor.  Vamik Volkan writes that  “When a group is in continuing conflict or even at war with a neighbor group members become acutely aware of their large-group identity to the point where it may far outweigh any concern for individual needs, even survival (1997).”  We “regress under shared stress” (Volkan, 1997).  In the case of the attack on Pearl Harbor and the subsequent internment of Japanese-Americans we illustrated how we perceived that our large-group identity was under attack and regressed by isolating and persecuting those we feared brought the attack.  In March of 1942 the military began to round up citizens of Japanese-American decent in order to move them to one of ten facilities being constructed in the United States.

The locations of these sites were rural, usually agricultural areas with little development surrounding the vast locations.  They were designated to be remote and only easily accessible by train yet also were required to have electricity and access to potable water.    Delta, Utah was the town closest to the Topaz site and provided numerous workers from the town to assist the War Relocation Authority in building up the barracks and other buildings needed to house the 8000 residents that would soon be relocated.  On September 11, 1942 Topaz was ready to receive internees at the rate of 500 per day until reaching capacity at 8000.  Topaz was the largest internment site in the United States at the time of its completion and most buildings were still being worked on as internees arrived.  Housing was simple with each of the 42 blocks consisting of 12 barracks.  Each barrack was 20 feet wide and 120 feet long and contained six apartments to accommodate families, a dining area, bathroom, laundry room and areas for recreation.   The center of the camp housed a library, schools and churches.  Surrounding the entire camp was a barbed wire fence with guard towers (Topaz Museum Visit Notes, 2013).    Life in the camps would prove to be drastically different from their homes in California. 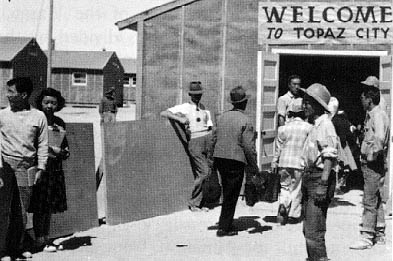 Topaz was added to the National Historic Register in 1974 and became a National Historical Landmark in 2007.  As you approach the campsite you begin to see signs asking that visitors refrain from removing artifacts and any items found in the area.  A small memorial with a plaque and flag graces the location were internees enter the site. I have been fortunate enough to visit Topaz several times with my most recent visit in January 2013.  With this winter visit, with incredibly cold temperatures, I was able to experience what a cold winter in the camps might have been like.   The site itself is simple with many of the barracks having been torn down after the camp closed.    You can still see the foundations for many of the barrack buildings, which are surprisingly large.  Several buildings have been recreated for visitors to enter and experience.   During my visit the cold from the outside was creeping into the barrack I entered.  Two military cots with thin mattresses and blankets sat beside an empty crib and small iron coal stove.  The walls were built cheaply and you can feel that living there in winter would not have been an enjoyable experience. 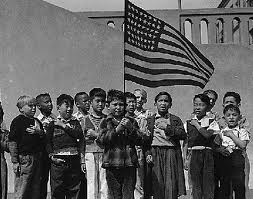 I became extremely emotional on entering the barrack when I saw the crib.  I am now a mother of an infant and it brought tears to my eyes imagining an infant living in this environment, regardless of how well treated the internees were.  The room was cold, even with the small stove burning wood and I was more shaken this visit then ever before because of what I was seeing and what I had experienced in the last few months as a new parent.  The site itself does not draw the numbers that many other World War II memorial sites do because the history of the sites is still very unknown in the American psyche.  We do not teach the history because we fear what it means.   How could Americans do this to their own citizens if we are so determined to maintain our freedom and civil rights?   Because we are human and we fear others when we experience violence and hatred.  We react by attempting to isolate or destroy them before they destroy us.  While the site does not yet draw the kind of visitors the Holocaust Museum does in Washington, D.C., it does evoke a certain loneliness and intense isolation.  Even today the area is sparsely populated and on visiting you experience a deep sense of sadness that 8000 people were forced to live here because of a nations fear.   Topaz is a topic that must be addressed by today’s educators or we will forget that we once acted out of anxiety and fear interning thousands of Americans because of the panic our nation experienced after a violent act directed at our home land.  We must use the narratives provided by Topaz survivors in order to educate the public about the events that occurred on our own soil during World War II or we risk subjecting more citizens to the loss of civil rights because of fear.